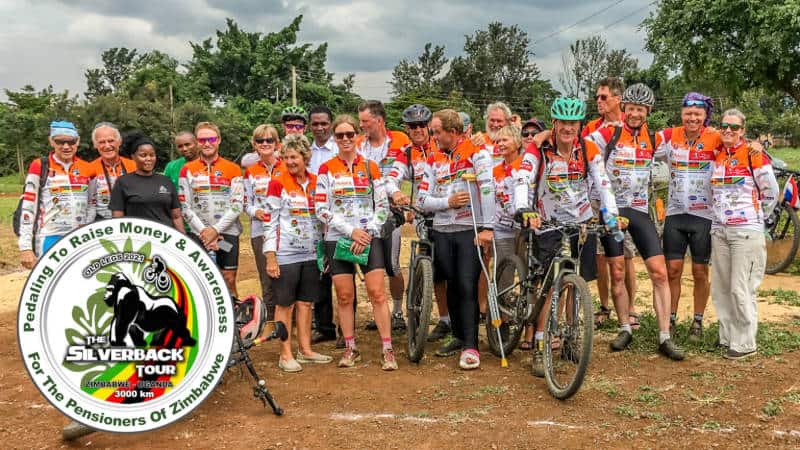 This year The Old Legs will cycle for charity in our toughest Tour yet to raise money for Zimbabwe pensioners ; the Silverback Tour, which will take us 3,000 km from Harare to Uganda’s impenetrable forest to find the gorillas in the mist.

The oldest member of our riding group will be 72, living proof that you are never too old to do epic.

We will be 10 riders with 6 support team members, including 2 photographers tasked with capturing every grueling kilometer. Our route will take us through Zambia, Tanzania, Rwanda and Uganda.

We’ll ride through Zambia’s iconic Luangwa National Park, through Chief Chitambo’s village where the heart of David Livingstone is buried, and on to Ujiji where Stanley spoke those words “Dr Livingstone I presume.”

We’ll ride alongside Lake Victoria in Tanzania, through the hills and past the volcanic lakes of Rwanda and finally on to Uganda’s Impenetrable Forest and the gorillas.

(As I type, half of me is thinking it is not a clever idea to ride 3,000 km plus many hills to get up close and personal with animals that I will no doubt be very scared of.)

Please join us on our adventure. Follow us up through Africa on www.oldlegstour.co.zw and on Facebook. But please be warned, we ride slower than paint dries.

Joining us on the Old Legs Tour this year for the first time are both Watermeyer brothers, Al and Laurie, which bodes well, because the book on adventure was written by a Watermeyer!

Born in Mutare in 1949, Al will be senior man on Tour. Because Alan Wilson was full, Al’s parents sent him to Prince Edward instead.

Al rode a bike to school and enjoyed that so much he never got back on a bike until just 10 years ago. Since then, he has ridden 6 or more Blue Crosses, the first part of the Old Legs 2018 Cape Town Tour and the Kilimanjaro Tour.

Al is ecstatic to be doing the Silverback Tour!

After University and National Service, Laurie flirted briefly with working in South Africa, but returned to Zimbabwe in 1983.

He caught the mountain bike bug in 1986 and remembers how proud he was the first time he rode 25km on tar, mostly downhill, without having to stop and rest. Since then, he has ridden more than a dozen Blue Crosses and rode with Ant Mellon on his first Harare to Cape Town Tour in 2008.

Six extensive clavicle repair jobs later, Laurie still hasn’t got the hang of riding down mountains slowly and continues to explore the limits of his MTB downhill skills. The correct term for someone like Laurie is a downhill nutter.

Back for the second time and by popular demand is CarolJoy Church. Born in Mutare, CarolJoy has lived in Germany for the last 19 years. Growing up, her passion was for music, specifically the piano and the cello.

After studying music therapy, CarolJoy started working at a hospital in a picturesque but hilly area in the Ruhr region, with an emphasis on hilly. For environmental reasons, CarolJoy decided against becoming a car owner, and bought a bicycle instead, looking to tick the transport, fitness and relaxation boxes all at the same time.

In 2015 and back in Zimbabwe on holiday, CarolJoy rode her first Blue Cross and loved it, silly girl. Another Blue Cross later in 2018, she signed up for the Kilimanjaro Tour. To track her training progress, she signed up for a women’s challenge on Strava for most kilometres and most meters climbed in a calendar month and placed 23000 and something in her first month.

On the day we rode into Moshi at the base of Kilimanjaro, CarolJoy placed 10th on the same challenge. Incredibly, only 9 women in the whole wide Strava world had outperformed CarolJoy that month.

And now onto Uganda and the Silverback Tour. I fully expect CarolJoy to get to Uganda before me.

Joining us for the first time on an Old Legs Tour is Fiona Semper nee Smidt. Harare born-and-bred, Fi grew up desperately wanting to be a jockey.

Unfortunately, she grew up a bit too much, was deemed too tall to turn professional and pursued a career in Distribution and Logistics instead, working in the UK, SA and Zimbabwe. Commerce’s gain, the Horse Racing industry’s loss.

Whilst in SA, Fi ran the Comrades six times and Two Oceans twice. She told me she plodded her marathons, but I do not believe a word of it. Since taking up mountain biking in 2011, Fiona has ridden the Argus, the Sani to Sea and six Blue Crosses. I also expect Fiona to reach Uganda before me.

Fiona’s heart has charity written all over it. She is committed to riding to Uganda to help Zimbabwe’s elderly. And she has a special passion for helping animals, because animals can’t speak for themselves.

Jamie writes ‘I am mother of Isabella and Gabriella (two beautiful young girls entering their teens) and wife of Liam (a hard-working farmer, exporter, all around good guy!) I am lucky enough to live on a farm, just out of Harare, where I spend my days assisting my kids in their online learning and helping where I can with various charity organizations. I am passionate about education and health & wellness.

2020 was a difficult year for most, but especially for vulnerable community members, like our old age pensioners. I have joined my dad on this epic adventure through Africa as a way to help raise money for old age pensioners in Zimbabwe.

I’m absolutely terrified and daunted by this task, something I think our old folks must feel about their daily lives. Please join us on our adventure as we travel to Uganda raising money and awareness for our most vulnerable, aged Zimbabweans.’

Incredibly, Jamie has had to purpose buy a bicycle for the Silverback Tour. But because Jamie is her father’s daughter, I also expect her to get to Uganda before me.

Heading up the support crew for the fourth time is Jenny de Jong.

Jenny is able to rustle up best ever meals, anywhere.

Her 482 bean salad lunches are especially good, ditto her pickles, chutneys and chilli sauces. In a push for maximum brownie points, if I wasn’t already married to Jenny, I’d ask her to marry me.

After 3 Tours, Jenny is going off camping in a big way.

In charge of Lindafication on the Silverback Tour is Linda Selby.

For those who not familiar with the term, to Lindafy things means to organize them not just alphabetically and without fuss, but also to colour code them, group them according to size and/or frequency of use, and all wrapped up in a Gantt chart that actually works, all with a smile on your face, with kind words for anyone and everyone, even if they are sweaty and stink.

Also in the backup vehicles for the second time is Vicky Bowen. Enthusiastic and energetic, Vicky is a force of a nature.

I have never met anyone who can enjoy sunsets, or sunrises, or for some reason, trees with white bark as much as Vicky.

Vicky cannot walk past anything without being curious enough to collect it and won the coveted Dick of the Day trophy on the Lockdown Tour for starting the Tour with 1 bag and finishing with 5.

And that excludes her collection of wooden axes. To stop deforestation in Matabeleland, Vicky bought every wooden axe ever made.

Joining us on Tour for the first time is Aoife Connolly.

Aoife is an appointed Trustee of the recently formed Old Legs Trust, tasked with establishing a Medical Emergency Fund that pensioners in need can turn to. Aoife writes ‘I was born in Ireland but bred in Africa.

The first African country I lived in was Uganda, so I’m sort of going back to my roots. Unfortunately, my parents named me Aoife, which when said in Shona, doesn’t translate very well.

After finishing school (with a colourful education from 5 different countries) I studied psychology in the U.K. which led me to work in the charity sector.

A stint home and a MSc later, I legged it back to Zimbabwe permanently, just in time to get roped back into charity work, through which I eventually met the Old Legs team. I’m more a swimmer than a cyclist.

Because riding a bike to Uganda is less of an option than swimming there, I think I’ll ride in one of the support vehicles.

On to the important stuff. My favourite colour is red, I’m scared of snakes, heights and possibly gorillas and my hobbies include drinking red wine and bossing Old Legs about.’